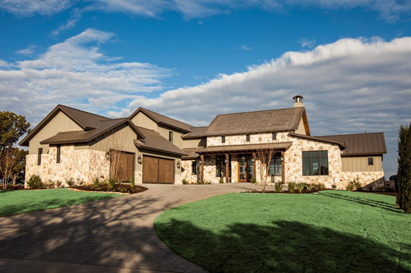 Texas is, indeed, the home of wide open spaces, longhorn cattle, horses, limestone, scorpions, snakes, bluebonnets and adventurers. Henley Homes, Inc. was born in Texas in 1985, has been serving the residents of beautiful Central Texas since that time and has recently celebrated its 25th anniversary. During the years Henley Homes has been honored to participate in historical restoration projects, an abundance of remodeling projects, the construction of several veterinary clinics, and its fair share of beautiful new custom homes. Its president, Gary Henley, the true talent in HENLEY Homes, Inc. believes that no matter the budget, the quality and thoughtfulness of the details are what make a successful project.

Gary received his Bachelor of Science Degree in Accounting. Little did he know, at the time, the part this financial training would play in his future. Prior to discovering his passion and talents within the building industry the degree took him to employment in financial management, purchasing, scheduling and cost control – a background that has provided him with valuable expertise in the budgeting process.

Henley Homes has been recognized on the local, state, and national levels receiving top awards for the company’s contribution to crafting homes of exceptional quality and attention to detail. Henley Homes received the coveted 2006 MAX Award for “Best Remodeled Project $100,000-$200,000”; The Texas Association of Builders named Gary “Remodeler of the Year” in 2010. He served the Home Builders Association of Greater Austin as its President in 2008 as well as a Director of the Association at the state and national level. He also serves as Area VI Vice-President in Texas and has served and chaired many of their committees. HHI has been an accredited business with the Better Business Bureau of Central Texas since 1994 and wears that distinction with pride. Locally, Gary has served as President of the Trustees at the Liberty Hill Public Library which Lana and he helped to get built.

Another banner proudly worn by Henley Homes is its participation in Southern Living’s Custom Builder Program. Only the finest custom home builders in the United States are invited to be a part of this Program, and Henley Homes has recently been invited to join this exclusive Program for the ninth consecutive year. Gary also serves on the SLCBP Board of Directors.

In 2011 Gary was honored to be the first recipient of the Southern Living Custom Builder Program’s “Building Hope Award” for his patriotic service to US veterans and their families. Gary’s real passion is to build and restore homes for our Wounded Warriors. He has donated untold hours of his time, funds and expertise volunteering with organizations devoted to building homes, remodeling existing homes and supporting our returning troops.

Lana Henley, Gary’s partner in marriage and in business, maintains a quiet but vital “behind the scenes” presence in their company. In fact, it was her savvy that forged the prestigious affiliation with Southern Living. Much of her time since 2000, though, is spent finding homes for retired racing greyhounds. She also loves family history research and, of course, their grandchildren. She often finds herself at livestock shows watching McKenna show her animals and at baseball games watching Will do his magic with a bat and a glove at first base.

The son of a carpenter, Henley grew up outside the small farming community of Crystal Springs, Mississippi. “My Dad was a fine carpenter – I worked alongside him in the summers, learned his skill and expertise, and saw the quality of the work produced by him and his longtime partners. His dedication to quality was always Lesson #1.” That early exposure to a craftsman at work has stuck with the award-winning Mississippi native, who literally landed in Texas after joining the Air Force to become one of the Austin area’s premier custom builders.